Getting there and away

Most international visitors to the Amazon will arrive by plane, and the state capital Manaus handles by far the largest share of flights to the jungle. The city is a major commercial destination as well as the starting point for many adventures into the Amazon, and its airport is well served by international airlines including American Airlines and TAP Portugal as well as the Brazilian airlines TAM and
Gol. 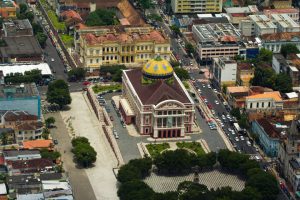 The international airport is some 14 kilometres from the city centre, and taxis are easy to find although congestion can make the journey longer than visitors might hope. Known as Eduardo Gomes International Airport, Manaus’ airport was the most modern in Brazil when it was inaugurated in 1976. It is no longer the most modern, but a major overhaul for the 2014 FIFA World Cup has brought it up to international standards.

Unless you have a hankering to sit on hot, cramped buses as they crawl through traffic jams, it’s best to avoid using public transport in Manaus. Taxis are readily available but be cautious of overcharging. Taxis from the airport generally operate on a fixed fare basis, but in other situations you should make sure the meter is switched on.

Travelling with a reputable tour company with arranged private transfers to/from the airport and your other destinations will take a lot of the stress out of moving around in Manaus. The same applies when taking to the water – the simple boats that transport locals and backpackers are far from comfortable, and at their worst can be dangerous. If comfort, reliable schedules and safety are nonnegotiable it’s best to stick with a preresearched, reputable operator.

A Journey Into The Amazon

The importance of the preservation of the rainforest only truly becomes meaningful if it speaks to your personal experience.

Stick to the international Leave No Trace principles to minimise your environmental impact.

5 myths and misconceptions about the Amazon

Expectations are often very different from the reality.

Sign up and receive a free e-book: The Brazilian Amazon - How to Experience the Rainforest in Style